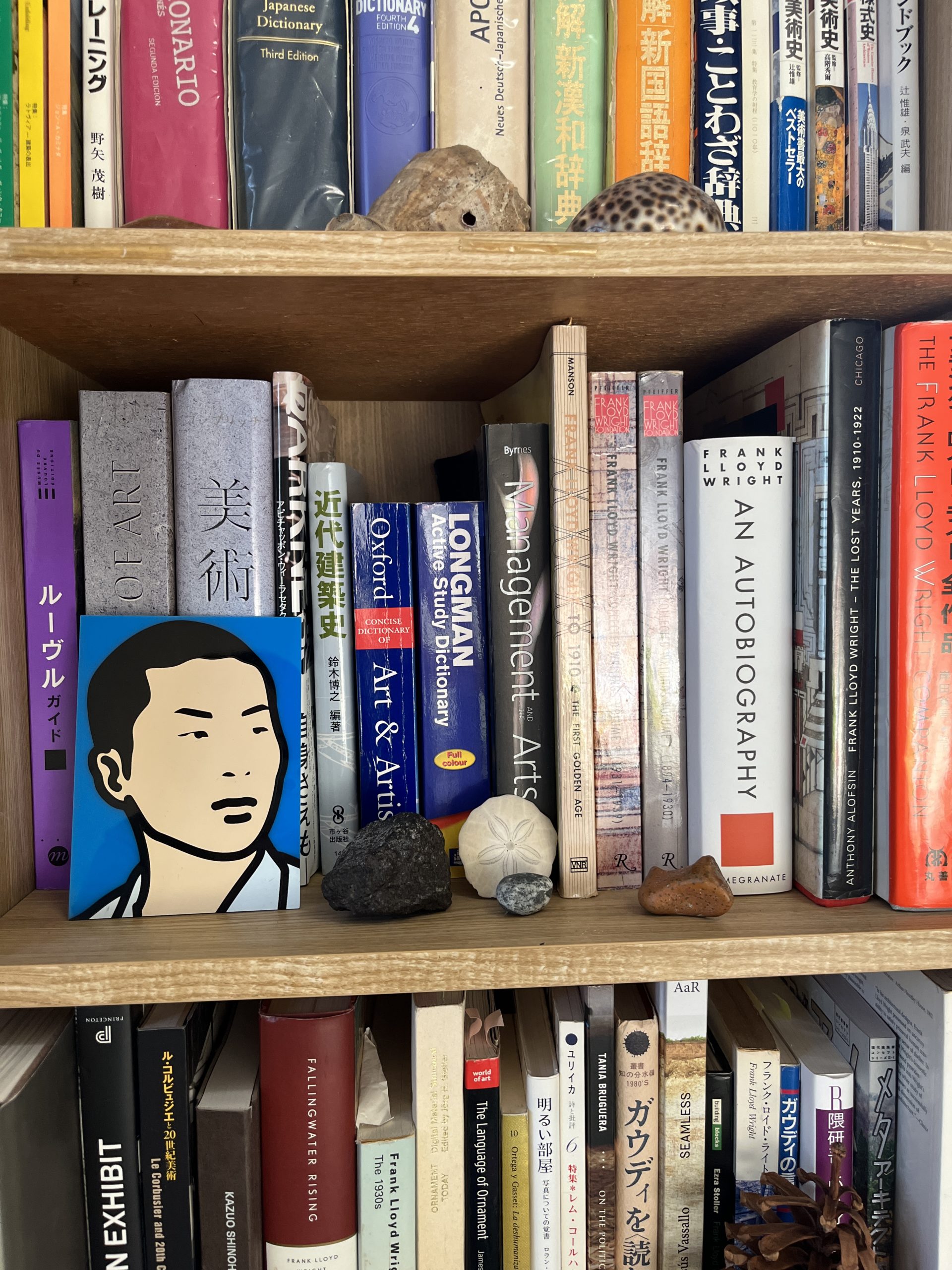 Graduated from the Department of Aesthetics and Art History, Faculty of Letters, Keio University in 2012, and completed the master’s course at the university in 2015. She wrote about Frank Lloyd Wright’s spatial expression, taking up Ukiyoe, Unity Temple, and his discourse. Since 2015, she had been an editorial staff of  a+u. Examples she engaged in “John A. Caminada” (a+u 15:10), “Latvia: Representations of Architecture” (a+u 16:07), “architecten de vylder vinck taillieu” (a+u 17:06), “nbbj” (a+u 18:12), and some articles on Shinkenchiku.In September 2020 she joined SEKISUI HOUSE – KUMA LAB as an academic specialist, in charge of LAB’s communication. She also works as a freelance researcher, editor, and writer.

Q1: How are you collaborating with SEKISUI HOUSE-KUMA LAB?
A1: I am a member of SEKISUI HOUSE – KUMA LAB, mainly in charge of communication. I lead the direction of this website and plan and organize events.

Q2: What is in your photo?
A2: Part of my bookshelves. Some stones from my collection, invitation letters, and books.

Q4: Tell us about your recent interests.
A4: I appreciate architecture and space and enjoy communicating my architectural experience to the public. Recently I am writing reviews on architectural exhibitions for art media.

Q5: How do you want to be part of KUMA group?
A5: I would like to contribute to creating a place where fun ideas can be visualized and realized. Also, through this laboratory, I would like to like architecture from more different angles and encounter more interesting spaces.

SEKIUSUI HOUSE- KUMA LAB uses cookies on this website. These help us both to keep the website functional and to recognize you and store some information about your preferences or past actions. Some of this data will be aggregated or statistical, which means that we will not be able to identify you individually.Privacy policy is in accordance with the University of Tokyo.
No.Got it!
Manage consent

This website uses cookies to improve your experience while you navigate through the website. Out of these, the cookies that are categorized as necessary are stored on your browser as they are essential for the working of basic functionalities of the website. We also use third-party cookies that help us analyze and understand how you use this website. These cookies will be stored in your browser only with your consent. You also have the option to opt-out of these cookies. But opting out of some of these cookies may affect your browsing experience.
SAVE & ACCEPT